In Ljubljana, we spent the night behind bars, locked into the cell of a political prisoner.

As the sun sank, there was no view of the night sky, but rather just the navy-painted ceiling and my imagination. In the darkness, I could hear the distant clangs of other barred doors locking. Hours later, through one small square window chiseled in a meter of stone, the sun rose.

With the rising sun, our imprisonment transformed. A morning of lazy strolling, ice cream beside the clear river, picking prunes and berries from the open market, slow hikes to stretched-out views of red roofs. In the distance, Alps dusted with snow.

With nightfall, we returned to our prison cell, locking the iron door behind us.

And so fell the pattern, the gentle rhythm of our three days in Slovenia’s capitol, Ljubljana. 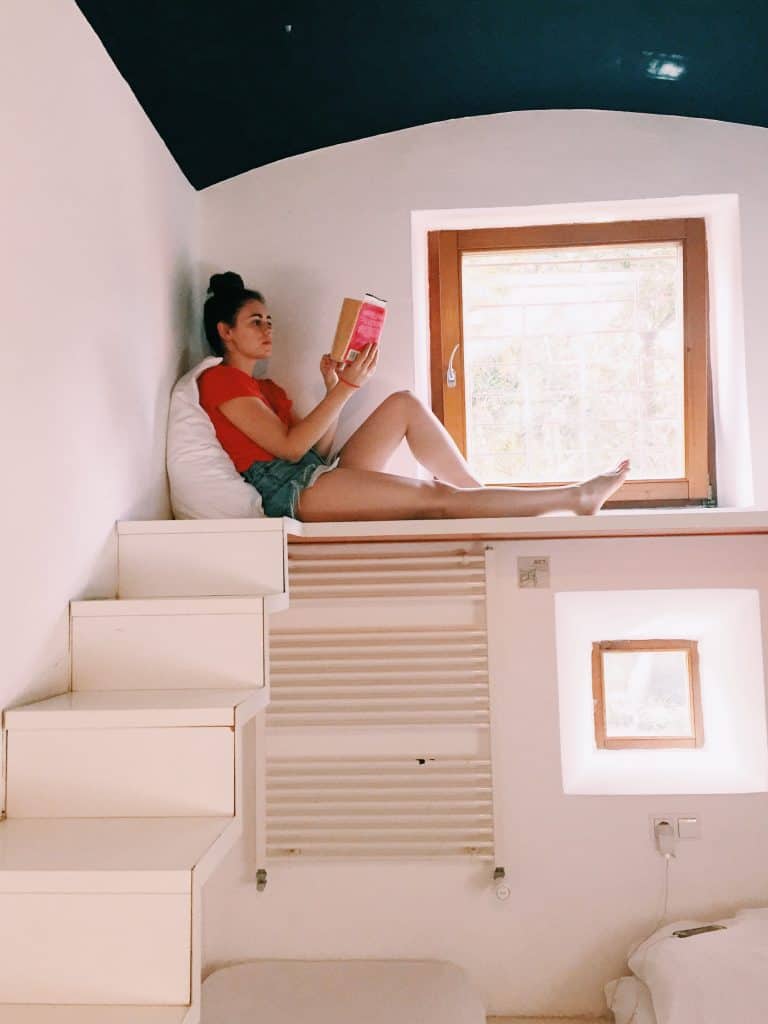 How is this possible?

Well, obviously we were not arrested in Ljubljana (although we did joke about this every time we jay-walked…that we should have bought an add-on to our basic travel insurance for jay-walking arrest bail). Instead, we arrived disheveled from our eight hour train journey on the doorstep of Hostel Celica. This unique hostel is in the alternative culture neighborhood of Metelkova, and was actually a military prison for over 100 years. Each cell was transformed by artists with varying visions. The entire hostel is dripping in meaning and art and vision, all mixed with the gritty Metelkova and the dark history of its walls. It truly is the most unique place we have ever stayed. 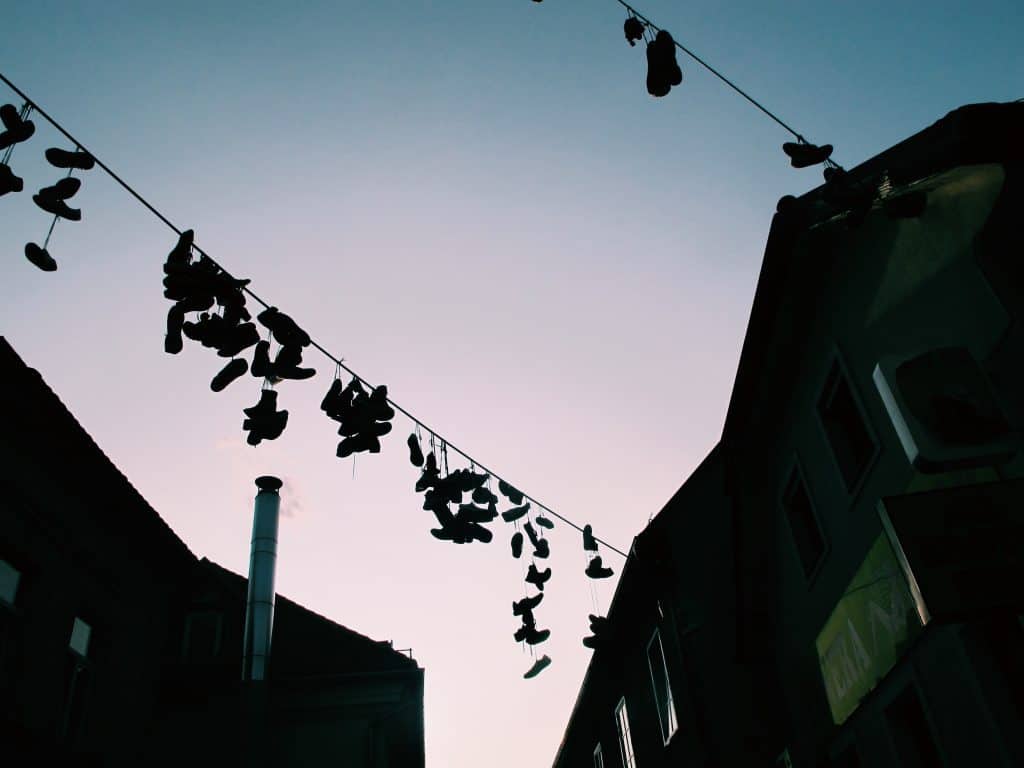 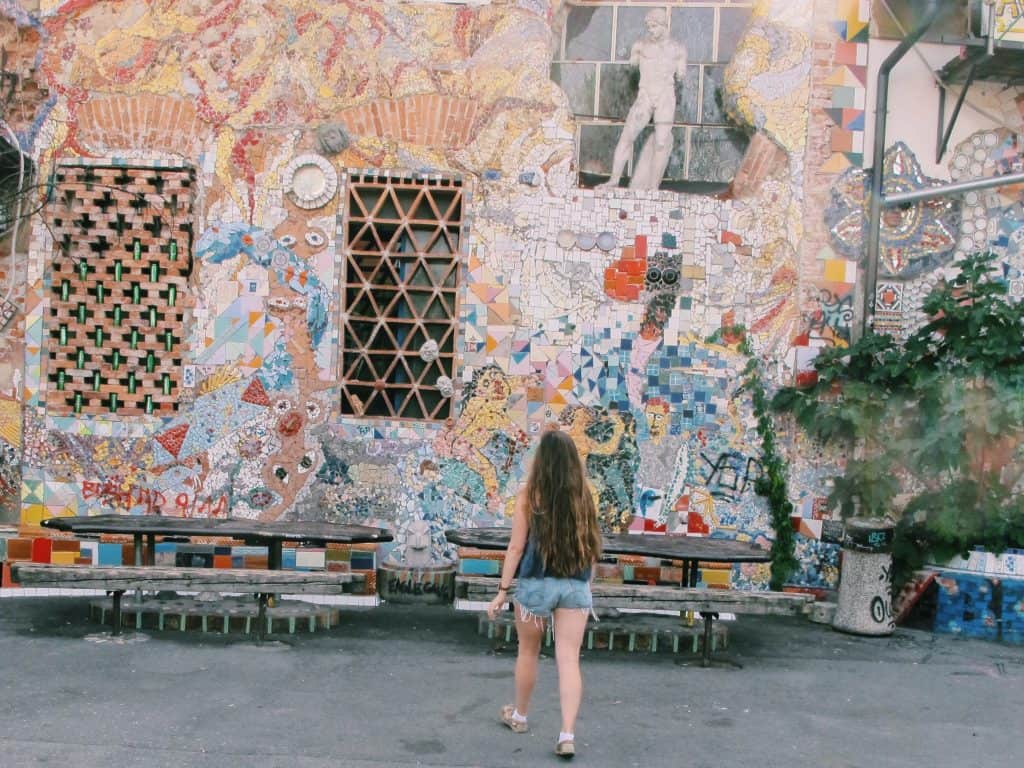 Of course, we knew the story behind Hostel Celica before we arrived to Ljubljana, but this did not prepare me for my feelings upon seeing it. It is difficult to describe – the neighborhood of Metelkova is teeming with mosaics and graffiti and sneakers slung across telephone lines, instagrammers and punks and drunks and everyone happily cohabiting. Located just a couple minutes’ walk from the train station, this eclectic neighborhood was our first glimpse of Slovenia. Although unmistakable, we still wondered if this could possibly be the right place? Then we spotted the outside of Hostel Celica … an imposing block with barred windows, but painted a dusty purple with thick lines of color framing the windows. 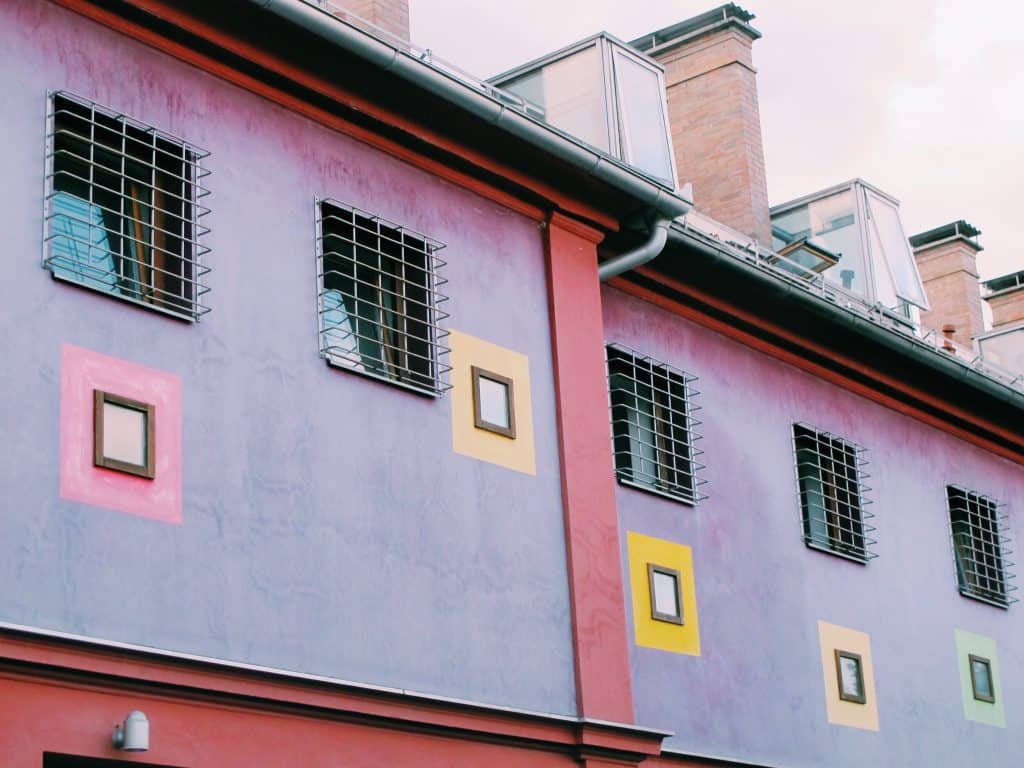 It was a confusing feeling to walk into this colorful prison, carrying our luggage. I mean – we checked into prison. (No self respecting jay-walking bandit would do such a thing, would they?!). 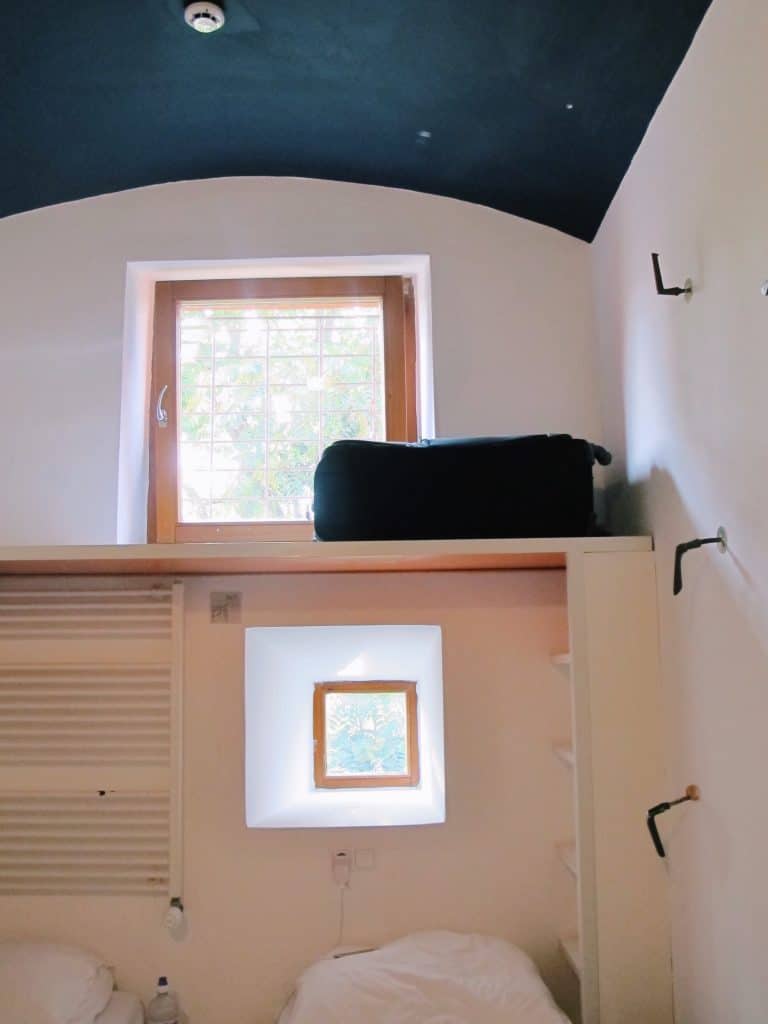 Hostel Celica is not an artificial representation of “prison.” No – it literally was a prison, with a dark history you can read about here. Some may feel creeped out by sleeping in a former prison. I was not expecting to myself, but I did question each creak and bump I heard our first night there. However, in truth Hostel Celica is a beautiful creation built from the complex past of a military prison, thanks to the work of many activists and artists. Its new identity as a hostel builds on this history, rather than erasing it, in an inspiring way. 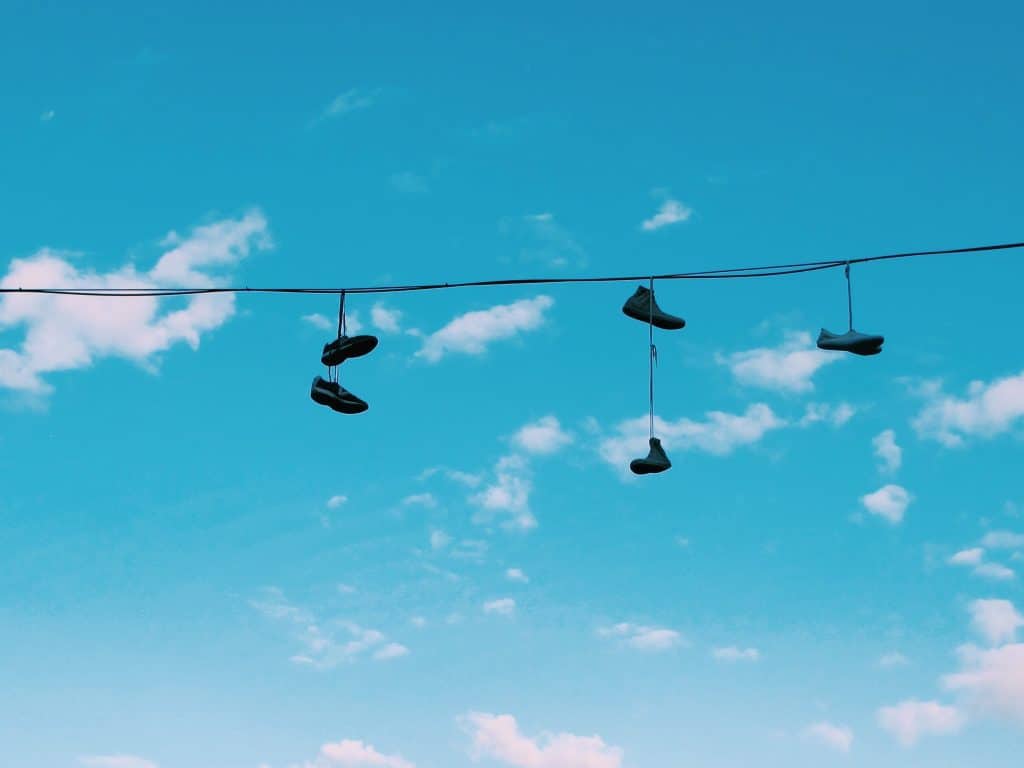 We made bail from Hostel Celica!

Of course, we did manage to explore Ljubljana as well as Hostel Celica (although compared to our other accommodations on our trip, we did spend a fair amount of time just staying in and enjoying the atmosphere of Hostel Celica). The hostel is located just a short walk from the city centre (but nothing in Ljubljana is that far away!).

We started each morning with a traditional Slovenian breakfast in the hostel, complete with rustic bread (on Dan’s part) and a veritable vat of coffee (on my part)… 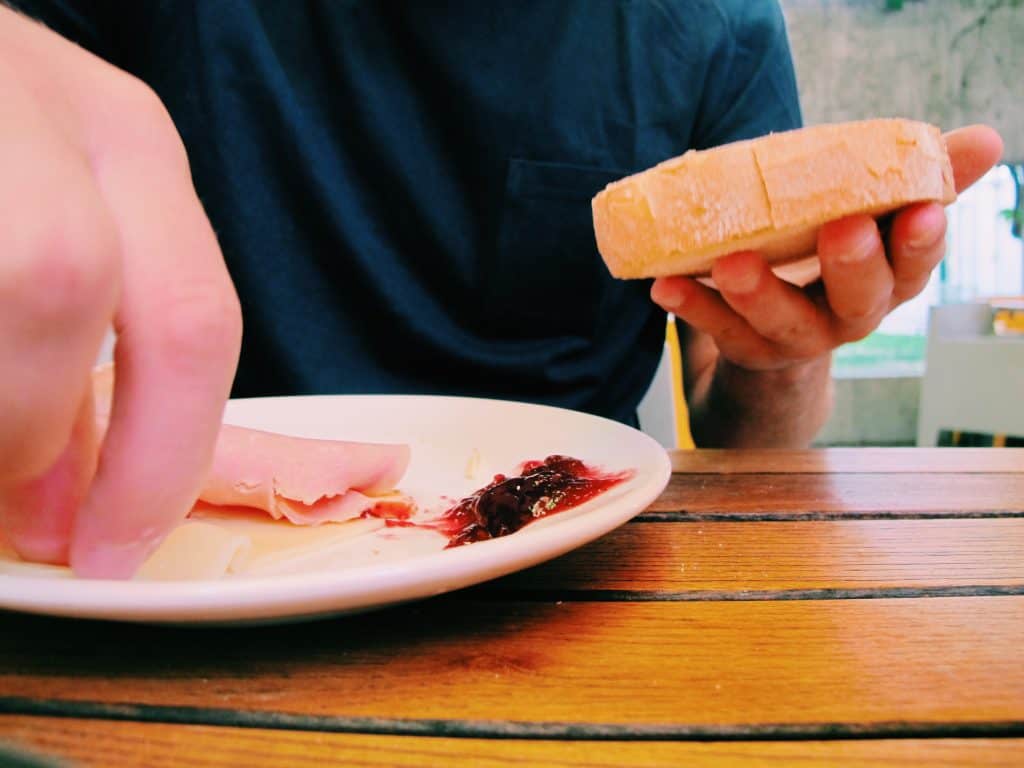 In the afternoons we wandering the cobbled and pedestrian-only streets, Dan on the lookout for traditional food and me photographing every small sign or piece of the city… 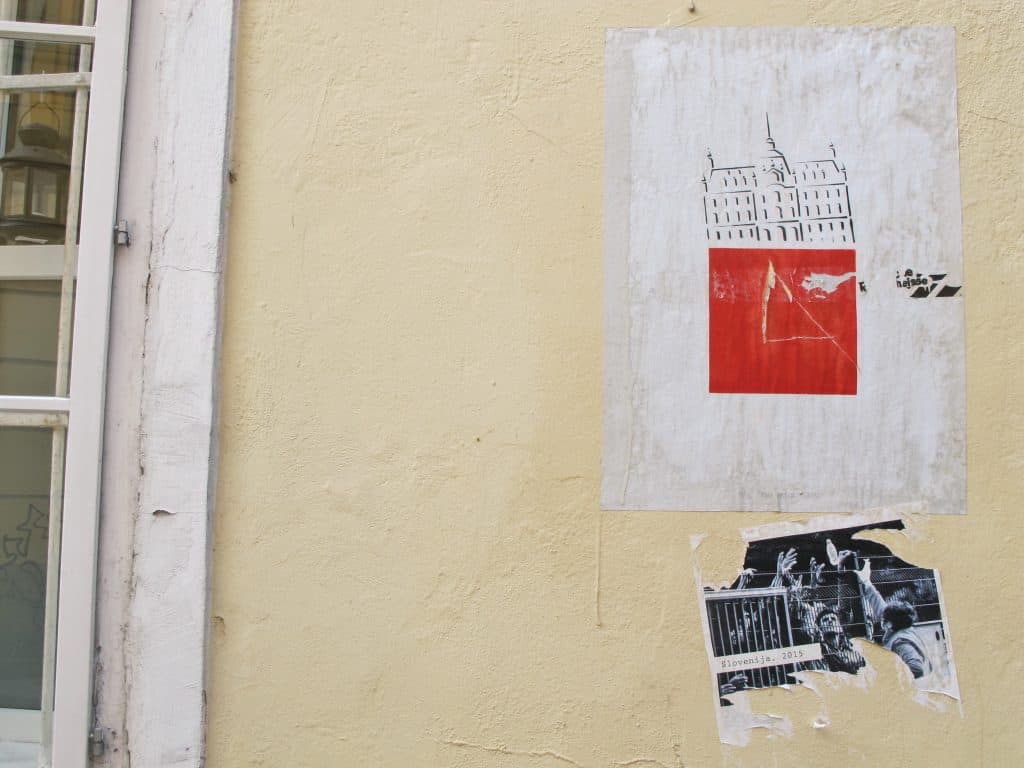 In the evenings we continued wandering, usually after freshening up at Hostel Celica. Ljubljana is small so it was easy to return to the hostel during the day and still feel like we did everything we wanted to. Our evenings were full of al fresco dinners, riverside strolls, and even some hikes… 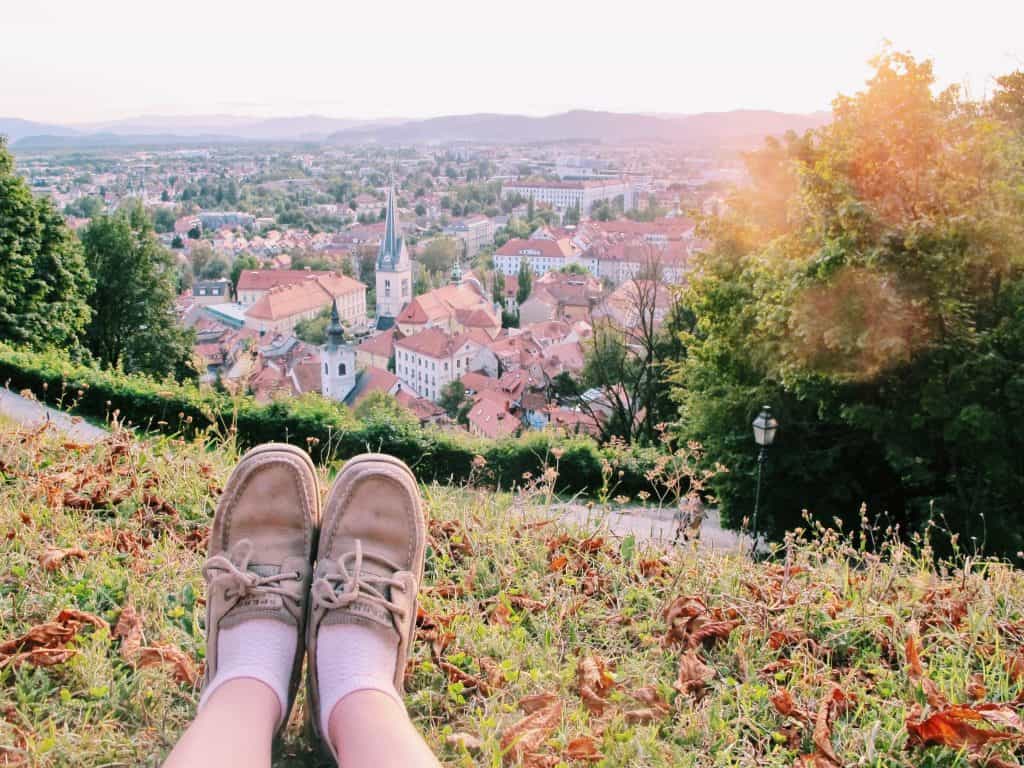 And all the while we tried to soak up as much of Slovenian life as we could, whether it was a casual “Dober Dan!” at the market, marveling at the pure tap water, or even the strange giant alien heads nailed to the walls in Metelkova. 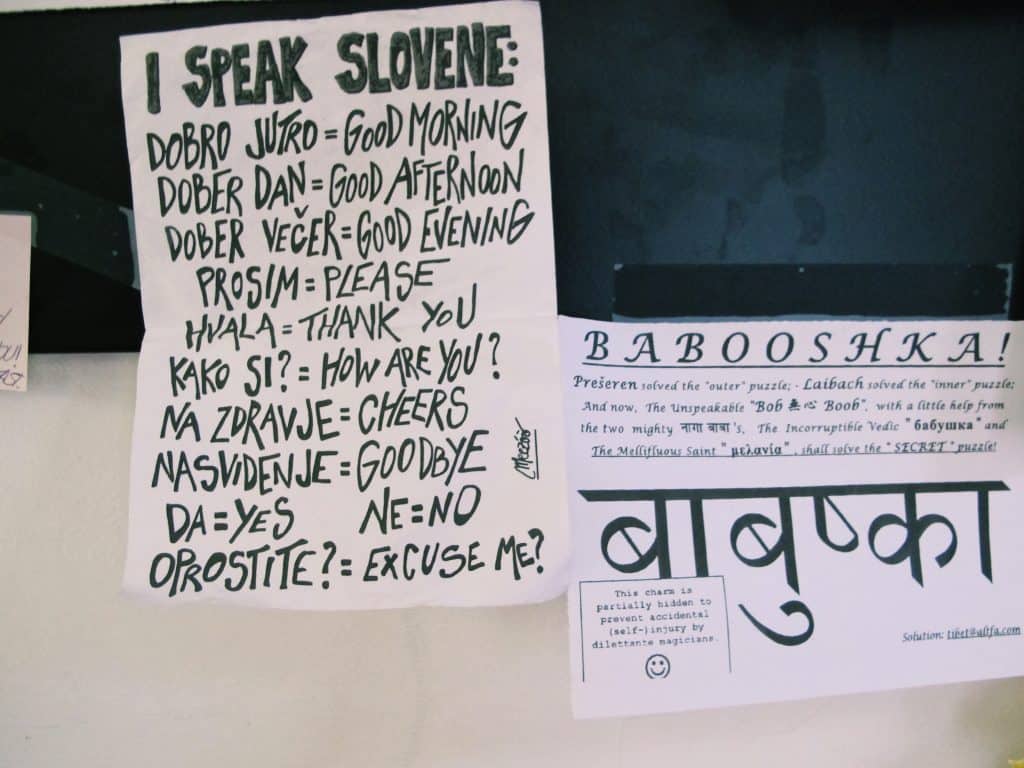 So… my first prison sentence was a rather peaceful one. In fact, I may have to commit another felony soon because I am beginning to miss my prison cell (don’t worry, just jay-walking)!

Address: Hostel Celica, Metelkova 8, SI – 1000 Ljubljana {this was very close to the train station as well as the city centre so couldn’t be more convenient!}

Cost: Price depends on season and whether you book a dorm or a private room. Prices range from €17-33 pppn and can be found here. Breakfast is an extra €4 pppd.

Would you ever stay in a prison? Have you ever been to Ljubljana? 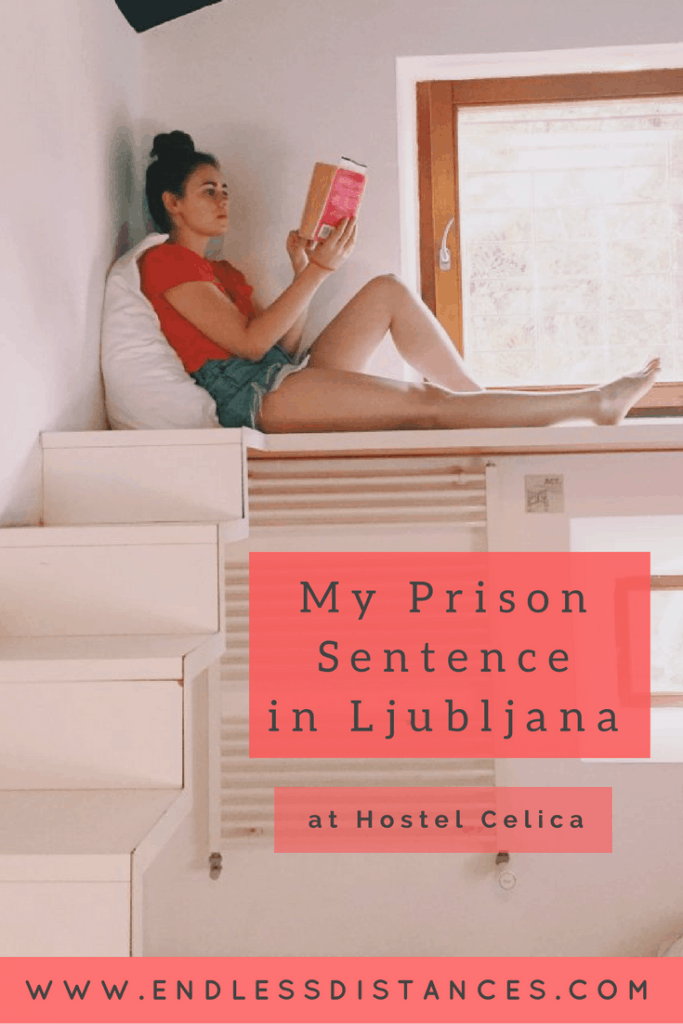 **Thank you to Tanja and Hostel Celica for our stay – we received a media rate to stay at Hostel Celica but all opinions written here are my own.