How to Spend a Weekend in Detroit

Oh my friends, it has been a lazy month of blogging for me, but I just needed to pop by and share about my birthday weekend in Detroit! This was my first birthday back in the USA and I really wanted to use it as an excuse to get my friends together in one place. However even among my American friends, we are spread out all over the place! A couple months ago I got my wheels turning about a good location that could be a halfway point for everybody and I settled on…. Detroit! Luckily, when I pitched it to my friends, they were keen too, and the plans for my birthday weekend in Detroit began.

Why spend a weekend in Detroit? …Is it safe?

You may or may not be surprised that I grew up in Michigan but never actually went to Detroit (apart from the airport, or the art institute right on the outskirts). I’m sure everybody remembers the great recession, but it hit us particularly hard here in Michigan because we are the seat of the automotive industry. If your parents didn’t lose their jobs, then your friends’ parents did or someone else in your family did. No city was hit harder than Detroit, which is the largest municipality in the USA to ever declare bankruptcy. I grew up 1.5 hours out of Detroit, hearing horror stories about the gang violence, abandoned buildings, arson, and people having to wear bullet proof vests under their clothes to work. Looking back now, I know that a lot of these stories were sensationalist, and this kind of negative media may have hurt Detroit in even more lasting ways than the recession itself did.

But Detroit is making its resurgence, and in 2018 Lonely Planet even named it the #2 city in the world to visit. I decided it was high time to visit Michigan’s largest city. Here’s a bit of what we got up to!

Weekend in Detroit: Fridays are for art & walkies

Weekend in Detroit: Saturdays are for markets & dancing

Weekend in Detroit: Sundays are for traumatic parking garages & brunching

Details for a weekend in Detroit

Planning your own weekend in Detroit? Birthday or otherwise? Here are some of my tips:

How to get to Detroit: You can fly into Detroit Airport, drive to Detroit, or take an Amtrak train or Greyhound bus. If you are coming from Canada, book via the Canadian Greyhound website.

Getting around: Detroit doesn’t have great public transport (minus the People Mover streetcar but that is only useful if you are staying only within the downtown area). You will want to use uber or your own vehicle to get around Detroit, if you can.

Where to stay in Detroit: For a group of 6, we stayed at Rambler’s House on Airbnb which was really perfect for everything we needed. It was really well decorated, spacious, lots of free on street parking. Airbnb is perfect for a big group like ours.

Book our exact Airbnb here, and for $40 off your first Airbnb purchase, use my referral code!

Check out TripAdvisor for the best rates if you’re more into hotels.

Final thoughts on a weekend in Detroit…

I’m so glad that I finally made it into central Detroit, a city that a lot of people have strong opinions about. There are a lot of abandoned buildings about, and a fair amount of potholes in the roads, but no city is perfect, is it? Overall I was impressed with how clean the downtown was, how many unique and thriving businesses there are (and how many of them were social enterprises), and how friendly and passionate the local Detroiters were that we met. I felt safe during our stay, even going out to a random bar til 2am, and staying in a residential neighborhood. (Probably the most dangerous thing I did was try and park in that garage downtown #livingontheedge). I hope my experience can assuage any fears you might have to venture into Detroit.

As for my birthday, like I said earlier, it was a bit like two worlds colliding with my college friends and my high school friends all finally in one place! But I was so happy to share my birthday with some of my favorite people.

Detroit is a city that gets under your skin, I think. I can’t wait to explore it more when I go back with Dan in a couple weeks!! Stay tuned for more Detroit posts after that trip, including a gluten free guide. Have you been to Detroit? Would you? 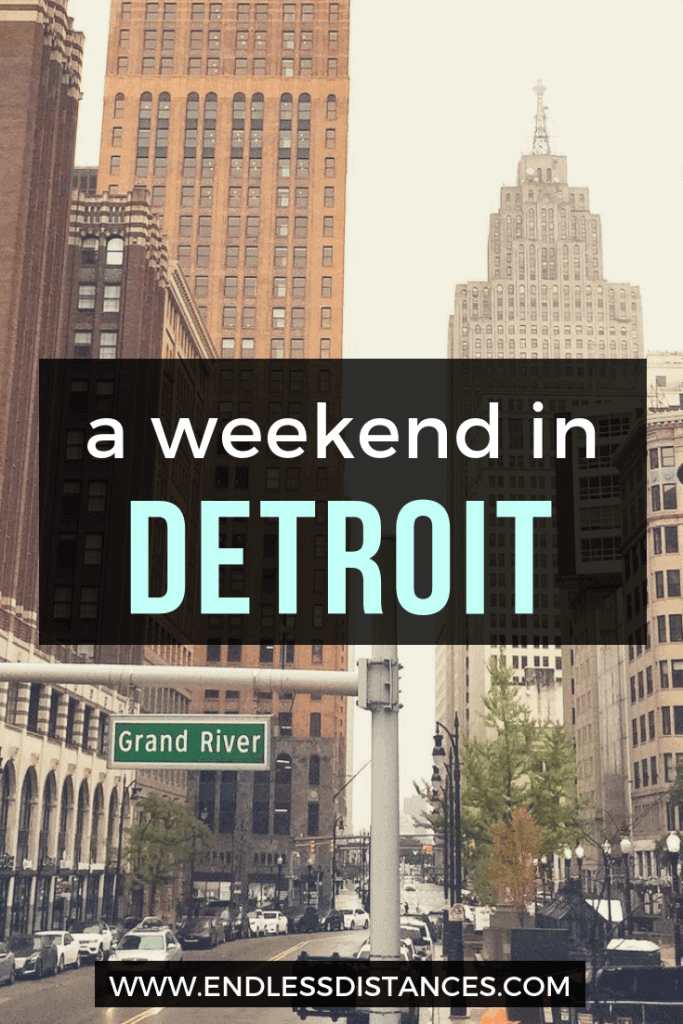 *This post contains affiliate links. If you click on one of these links I may make a small commission, at no extra charge to you. Thank you for supporting Endless Distances!