The separation of church and state….and blog? This is the rule we live by. If you’d like to see me break it, read on…

I was in Prague the same weekend as my country’s immigration ban exploded across the world news scene. I’d like to share a little story with you about that weekend… 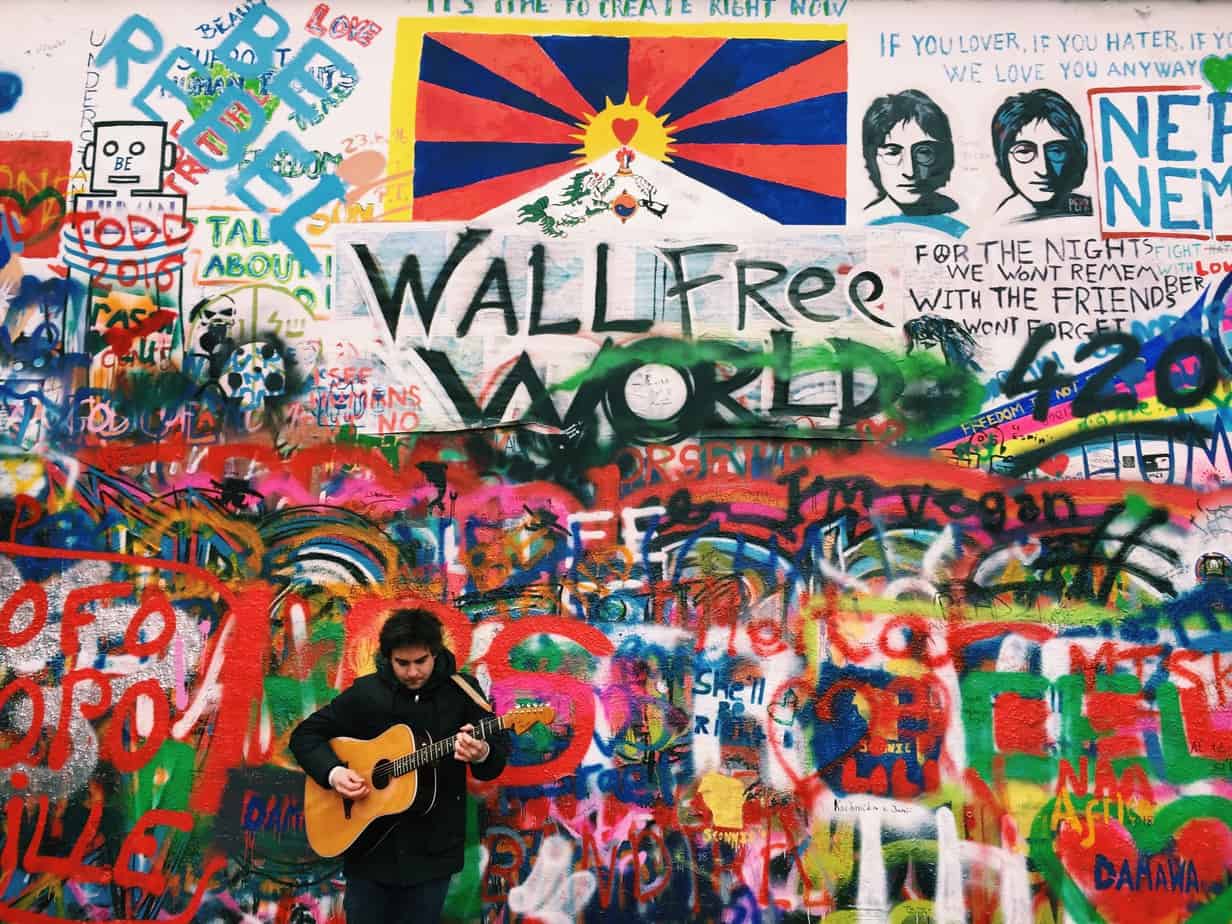 I was raised Catholic – this religion was passed to me from my mother and her mother before her, who came to America from Wales. It’s hard to believe now, especially in America, but Catholics were once the ones being persecuted like the Muslims are now (read here, here).  My grandmother’s family came to America from Wales with no money, but a fierce belief in their religion, and that their new home would grant them the freedom to practice it.
She also came to America with a gold necklace. 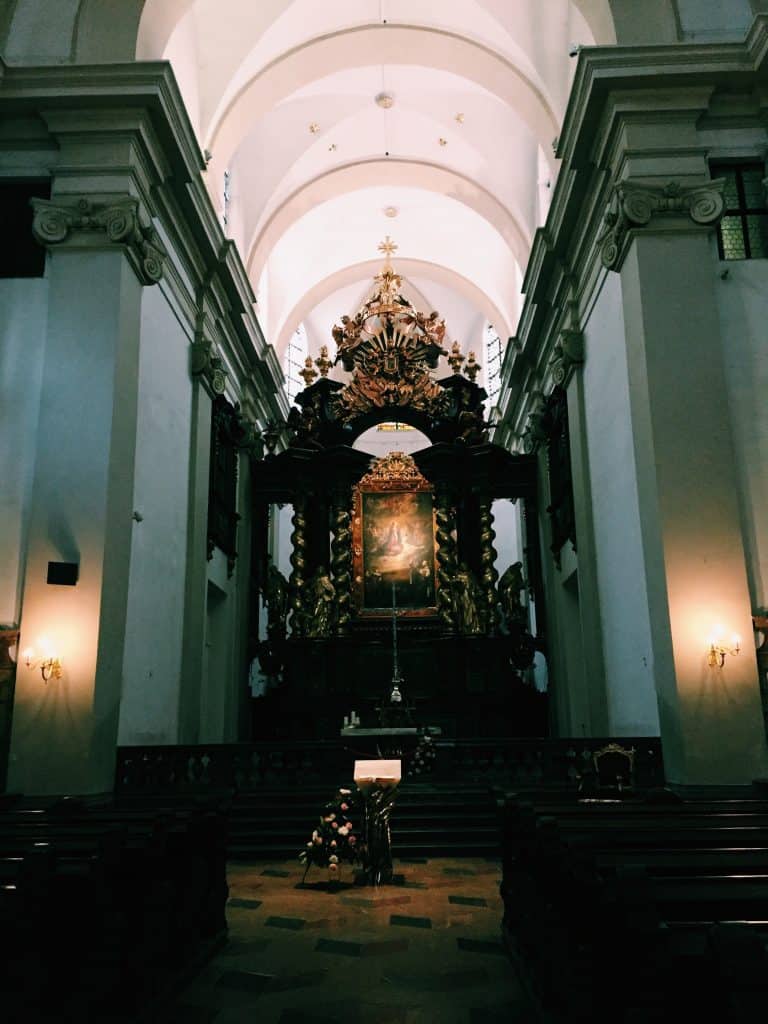 This necklace had a very small medallion on it, a tiny replica of the Infant Jesus of Prague. The Infant Jesus of Prague is a small wax statue, housed in the Church of Our Lady Victorious in Prague. The statue’s origin is traced back to the 1300’s, and there are many myths and stories surrounding it, but they have a common thread involving miracle, healing, and protection. Catholics make pilgrimages from all over the world to see this statue, especially in times of famine, war, or other distress.

When my mother was young, growing up in New Jersey, my grandmother gave her her own gold necklace with a small Infant of Prague medallion. My mother wore this necklace every day, until one day it broke off. She was heartbroken. My grandmother ended up gifting my mother her beloved necklace from Wales, which my mother wore every day. I remember being very little, gripping onto my mother’s golden chain. When I was around 6 years old, I decided to take matters into my own hands, and rummaged through a drawer in my dresser, where I found a golden necklace that my Godmother gave me when I was born. I marched downstairs and announced that, just like my mother and hers before her, I was never EVER going to take this necklace off. My parents laughed at the time, but here we are many years later, and that necklace has hung around my neck for nearly every day of my life.

A few years ago, my mother was swimming laps, and she noticed that her medallion had somehow come off her necklace. She searched and searched, but the tiny Infant of Prague in the deep swimming pool was nowhere to be found. After that, my mother tried different stones and medallions on and off, but none seemed to stick.

When I told my parents about my plans to go to Prague, the first thing my mother brought up was the Infant Jesus of Prague. I of course knew the significance of our matriarchal religious necklaces, but I hadn’t realized that both my mother’s and grandmother’s had been of the Infant Jesus of Prague. My mother told me about the pilgrimages, and the many stories of miracles, and asked me to visit the statue. The more I researched, the more I was fascinated.

I planned to visit the statue in Prague, but it was completely by chance that on our first day we got lost in Mala Strana in an effort to “get a feel of the city.” I looked up at this church, which just felt significant. We did a quick look at our map, and realized we had actually walked STRAIGHT from our hotel to the Infant Jesus of Prague without even realizing it.

Inside, the church was dark and calm. It took me a moment before I noticed the Infant Jesus of Prague, on the right side of the church. He was tiny, dressed in a red vestment. There were a few people wandering the church or sitting in pews, but it by no means felt like some over-crowded, desperate pilgrimage. It was gentle, and everything felt safe. 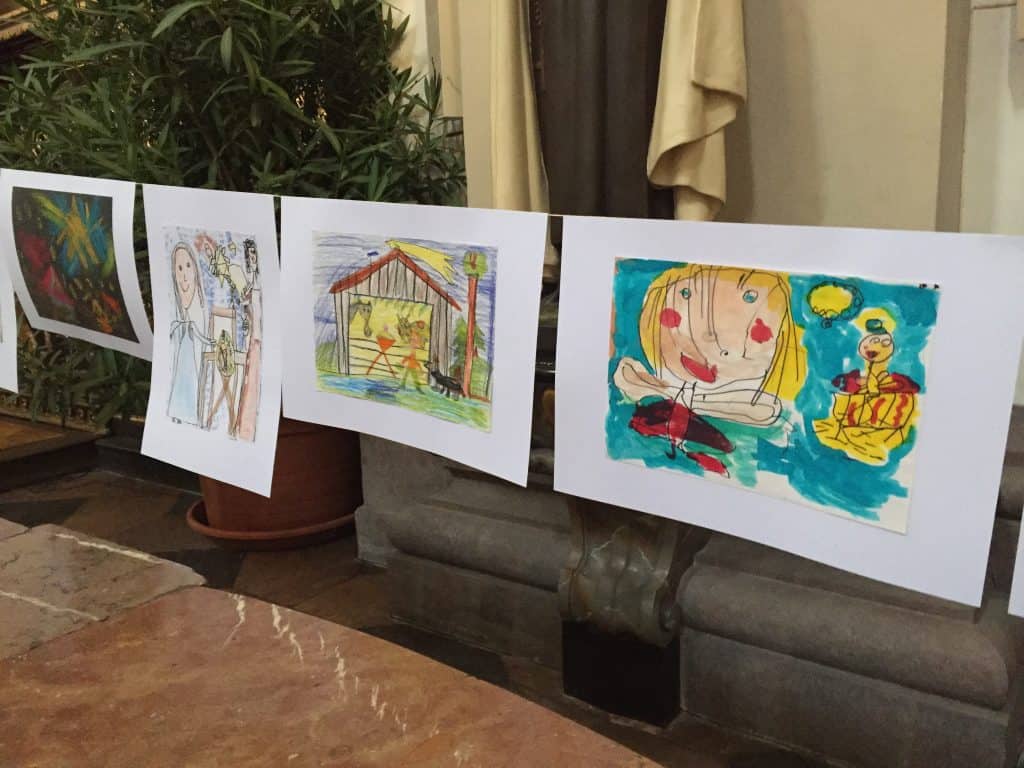 A nun was hanging up a string of colorful drawings, done by children all over the world of their image of the Infant of Prague. The string of drawings waved in the slight wind from the open door. The drawings largely obscured the ornate windows and figures behind them, funneling your focus onto the childlike interpretations instead. 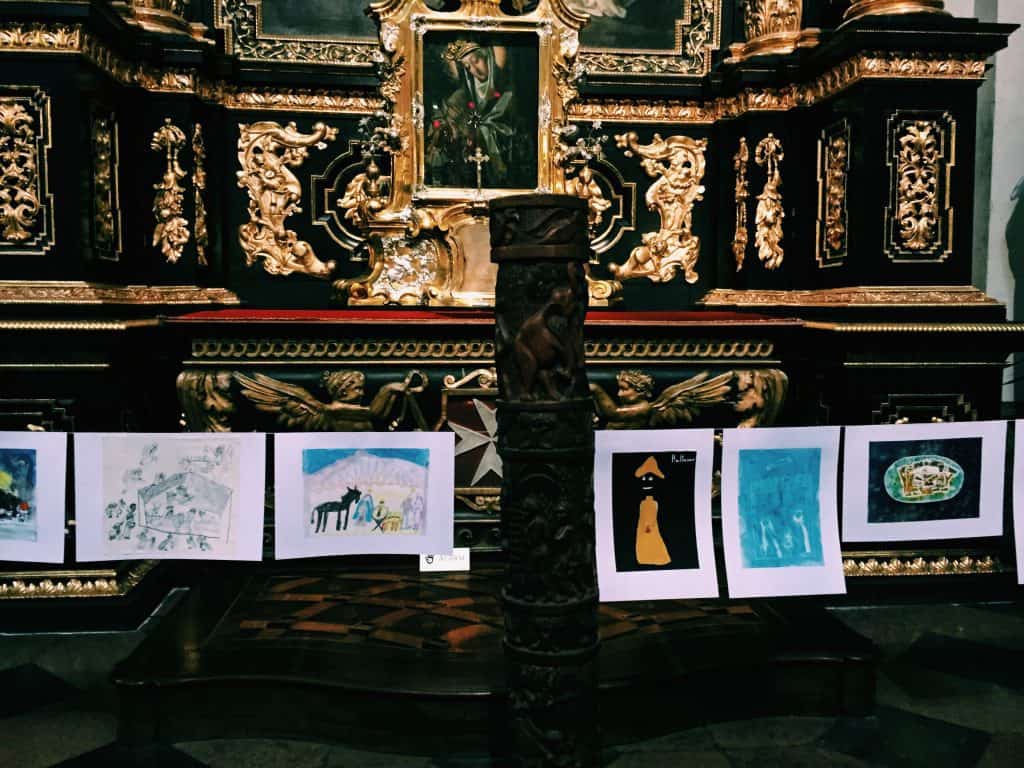 Upstairs, we saw the “museum,” which is basically a small collection of the different vestments. I was expecting the usual red, purple or green ornate Priest vestments, but instead there were South Korean, Vietnamese, Italian, Hungarian, Chilean, you name it… all different vestments gifted by different cultures and spanning centuries. 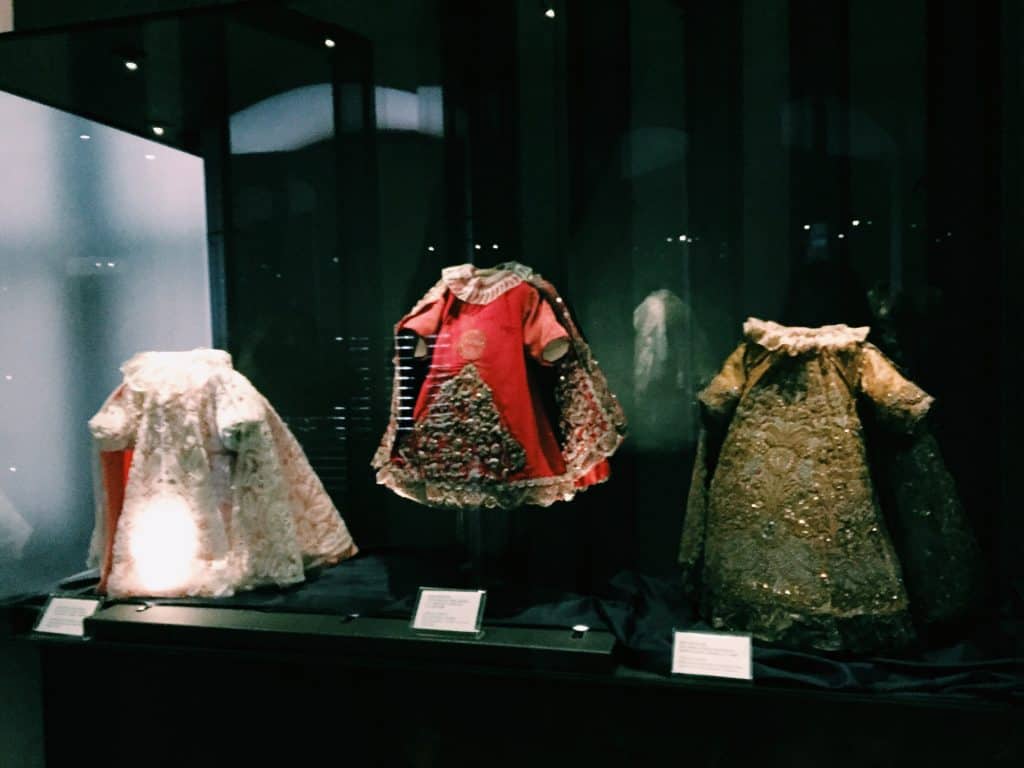 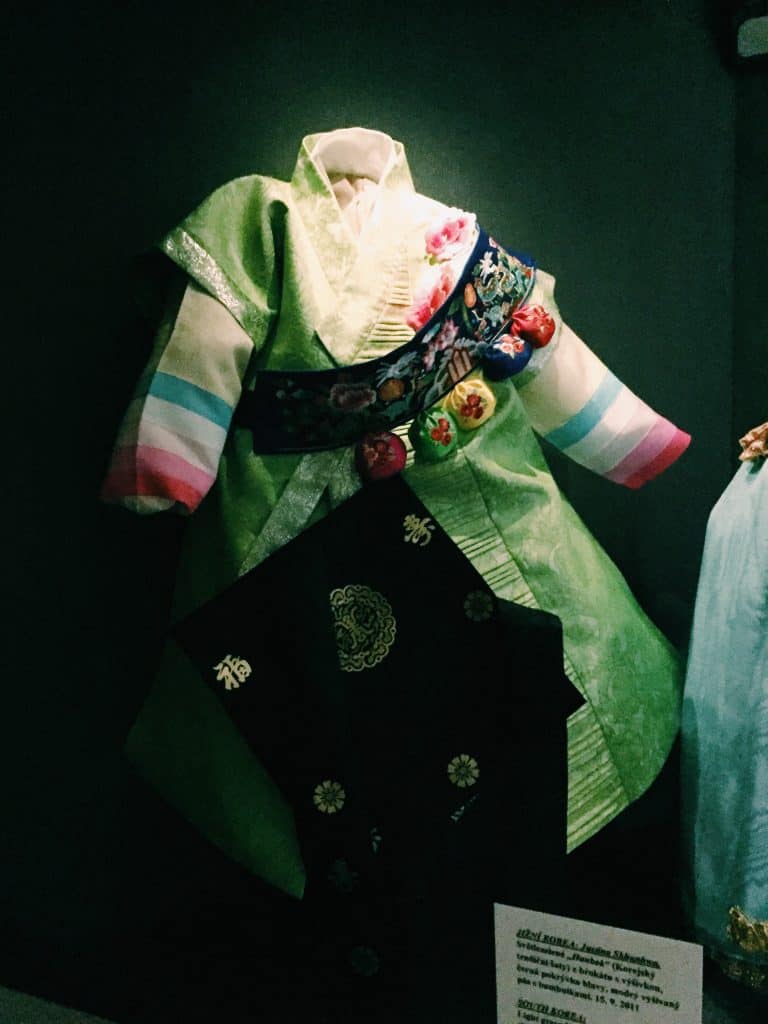 Similarly, the stairwell was lined with glass cases full of various copies or interpretations of the Infant of Prague, gifted to the church from all over the world. It was so much more than the anglo European interpretation of Jesus, with his long brown hair, porcelain skin, and small bones. Instead there was a jet black baby Jesus from Ghana, a caramel baby Jesus from Arizona, a clay creche from Chile, an ivory creche from Japan. It was so, so, so beautiful. 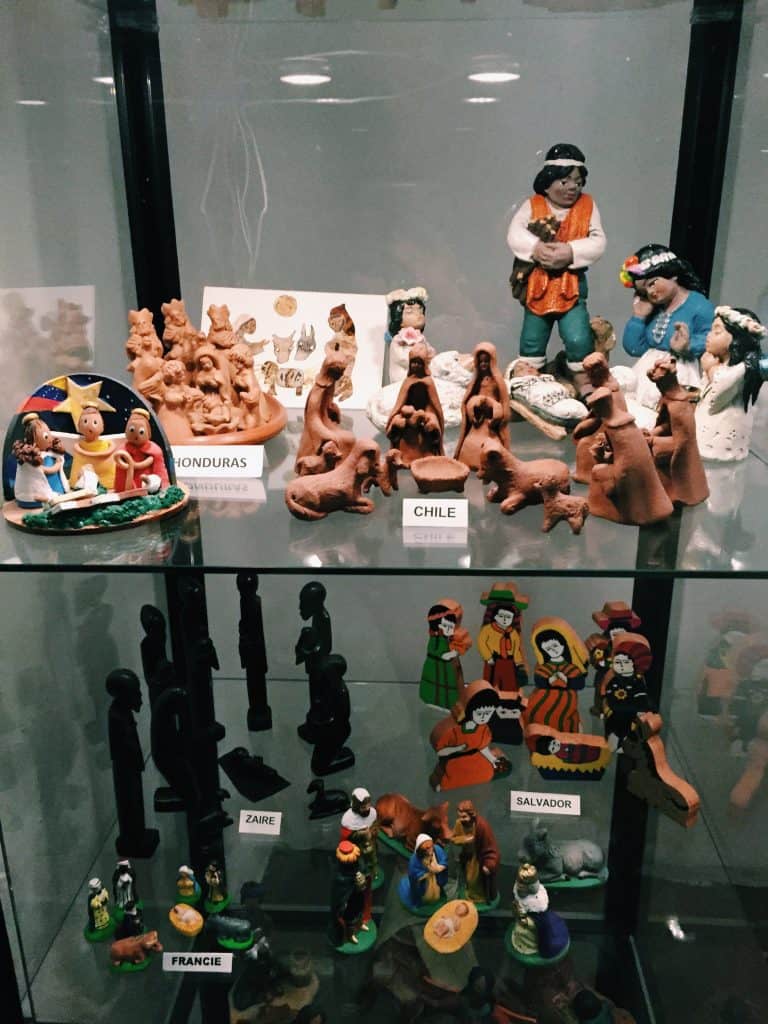 In my experience, the Christian religions, are often morphed into a narrow, white, Western interpretation. We want to see ourselves in that which we value, so we’ve morphed Jesus (who historically was undoubtedly a dark skinned Jew) into a representation of ourselves. So, in a place that has carried so much meaning for centuries of pilgrims, and particularly my own personal family meaning, I cannot tell you how grateful I was to see, maybe for the first time, a truly inclusive representation of Catholicism. In the midst of so much hatred and ignorance in our politics, largely in the name of religion, it was refreshing. 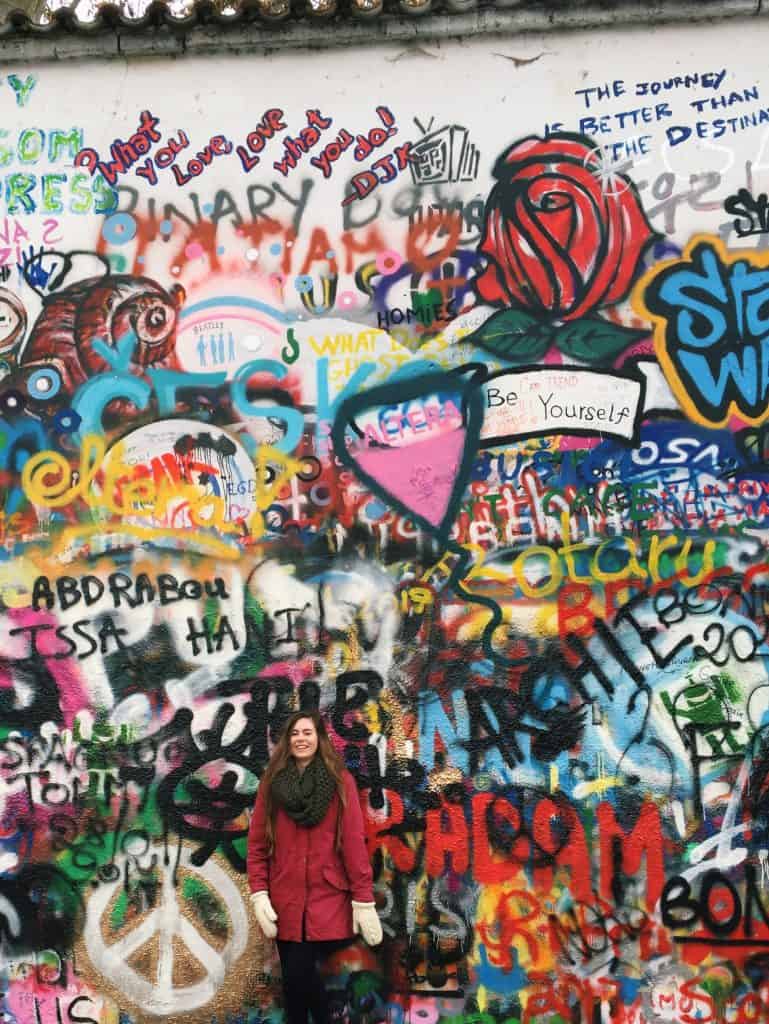 Afterward, we went to the John Lennon Wall – as different in outward appearance from an ancient church as can be. But the graffiti covered wall somehow carried  the same sentiment, the same energy, we got from seeing the Infant of Prague. In its bright colors I read a message of connection, solidarity, openness, love. That no matter where you came from, what language you spoke or what color you are, you are welcome.

A message that was much needed on the day on which I was thousands of miles from home, with my inescapable American accent, surrounded by the critical eye of, well, the rest of the world. The day that some people in my country decided the way forward was the opposite: hate, separation, a ban.