Yesterday on the commute back from class, I found myself sitting on a double-decker bus, watching a Royal Navy bomb squad disassemble eight grenades 300 meters from the roundabout we were stuck in.

Eight unexploded bombs were found during road works on Plymouth’s most central road.

Now, before I send any family members reading this into heart palpitations, I’ll explain – it turns out this isn’t actually that uncommon in England. Especially in Plymouth, one of the cities almost completely destroyed by World War II. Every once in a while, someone does a bit of digging and uncovers a war-era bomb that, for some reason, didn’t explode when it first landed. (And has just been sitting beneath our homes for decades, ticking away).

And the Brits, unsurprisingly, are very British about all this.

Take my text convo with my boyfriend…

Him: Nightmare. So what’s up?

Or the Plymouth Herald newspaper’s riveting coverage of the event…

^^Wow it’s super inconvenient that we found these 8 bombs at 5pm, couldn’t they have waited to be found during our regular working hours 0800-1600 except not 0900-1500 because we are having a tea break then? 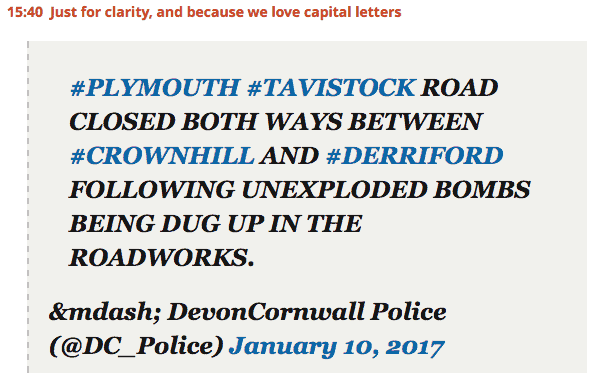 ^^I thought we were supposed to keep calm and carry on, these capital letters are sending me conflicting messages

^^And now, over to our reputable source, Man On A Bus

^^Thank you, Man On A Bus, for your mesmerizing input. We are all forever in your debt.

Please tell me if there’s anything more British than being more concerned over the state of traffic and whether you’ll make it home for tea than the fact there are EIGHT EXPLODING BOMBS? ON THE BUSIEST, MOST CENTRAL ROAD IN THE WHOLE CITY? THAT ALSO HAPPENS TO BE RIGHT NEXT TO THE HOSPITAL?? I’m serious. Please let me know.

As I sat on the bus, snap chatting the tiny bomb squad in the distance (and sufficiently concerning everyone on my contacts list with a black photo reading “HI BOMB SQUAD LOLOLOL *crying emoji*” and no further explanation), I began to feel it. I began to feel…

(And I think I’ve pretty much whipped it out with this post, too.)

But the thing is, we don’t have casual rush-hour bomb squads disassembling WWII bombs on a Tuesday in Michigan. THAT DOESN’T HAPPEN. I mean, we’ve got lotsa guns and tyrannical leaders and oppression, but WWII bombs??? Nah. We’re not about that.

The USA was not peppered with bombs in any war the way much of Europe was. The way much of the Middle East is currently being. Sometimes I wonder if that’s one reason why, as a country, we are pretty trigger happy. Send the troops off to bomb XYZ country? Why not? Maybe things would be a bit different if all Americans had to sit through the deep hell that is traffic during a rush hour bomb alert. If for two years, your commute took you over eight bombs, and for two years, those bombs stayed nice and un-exploded. Not that I’m saying the sitting in traffic is the worst part – but that this experience is normalized. That these bombs buried decades ago, and the other events of WWII, are felt like an aching scar on even the youngest European.

Food for thought, I suppose. I hope all your weeks are lovely and bomb free, wherever you happen to be.